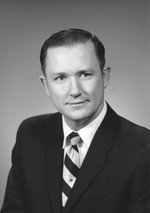 Lewis G Hale was born April 16th, 1926 to George and Bessie (Matlock) Hale. He passed from this life May 20th, 2018. Lewis’ passion to preach the gospel began when he was a child and continued throughout his life; he preached his first sermon at the age of 16, and the day before his death he said that he was hoping to teach bible class the next weekend. Lewis was a lifelong student, and he was always thorough and careful in his studies. He was the Valedictorian of his class when he graduated from Keota High School. Lewis was a veteran of WW II proudly serving in the Navy.

Following his Navy service, Lewis went to Freed Hardeman College to prepare for a life of ministry, where he met Ruth Mallett; they would marry and enjoy a 69-year marriage, working for the Lord together in the service of His Church. He transferred to Abilene Christian College, where the school newspaper described him as a “debating dynamo” in a feature article. Following graduation with a BA in History, he began his career as a Minister to the Lord’s Church. During his early ministry work, he continued his study of History at the University of Oklahoma in Norman, doing graduate work there.

Following his ministerial work in Stigler OK, and Lorenzo TX, he moved with his wife and two young sons to Oklahoma City to begin his full-time ministry with the Southwest Church of Christ. Lewis loved this congregation and served for 57 years until his retirement, before preaching by appointment at various locations in Oklahoma. Lewis was proud to be able to serve as a minister and preacher of the gospel of Christ. He not only proclaimed the word, but he ministered to the needs of the Church and all with whom he had contact. Lewis could often be found visiting the ill in the hospital, night or day, comforting grieving families, or counseling people dealing with life’s burdens.

Lewis was very active outside of the church as well. He was a part-time instructor at Oklahoma Christian University for 13 years, President of the Board of Directors for Rock Creek youth camp and served as an Oklahoma City Traffic and Transportation Commissioner for 17 years. Lewis loved working with children, and he directed camping sessions at Rock Creek youth camp for many years, helped by his family and many friends. He helped found the Christian Men’s Retreat. He worked to further Christian education, writing articles, books, and bible school material and publishing them as well; this included several years of weekly articles that Lewis wrote for publication in the Daily Oklahoman. He started Hale Publications along with his wife Ruth, to make educational material available for churches across the country, including workbooks which he wrote for all of the books of the New Testament and some of the Old Testament books, as well. Lewis was well-regarded for his insights and careful reasoning, and his ability to make complex topics accessible.

Lewis is preceded in death by his parents, siblings Orlen Hale, Wanda Lively, Helen Guthrie, and Doris Lusk. He is survived by Ruth, his wife of 69 years; children Mike and Vernona Hale, Barry Hale, Melinda and Bryan Sims; brother Jim Hale, in-laws Faye and Walter Billingsley, 8 grandchildren, and fifteen great grandchildren. Also, a host of nieces and nephews. He is also survived by his family of brothers and sisters of the Southwest Church of Christ.

He has the ability to say with the Apostle Paul, “I have fought the good fight, I have finished the course, I have kept the faith”. It was fitting that his passing occurred on the Lord’s day.

To send flowers to the family or plant a tree in memory of Lewis G. Hale, please visit our Heartfelt Sympathies Store.