To share your memory on the wall of Richard Krivy, sign in using one of the following options:

Richard married Sharon Kay Fullerton on October 3, 1958, in Blackwell, Oklahoma. He graduated from Oklahoma State University in Stillwater, Oklahoma, with a degree in Mechanical Engineering in 1961. Together, Richard and Sharon raised their three children, Susan, Linda, and David in Illinois, Pennsylvania, and Oklahoma.

He was a member of First United Methodist Church in Duncan, Oklahoma, and Church of the Servant after moving to Oklahoma City in 2009. Richard was a licensed professional engineer in several states and enjoyed a successful career at Caterpillar, Halliburton, and Hydra Rig. Richard was always a very hard worker because he lived to support his family. He often joked that he “failed at retirement three times”.

He enjoyed designing and building furniture, even constructing an addition to his family’s home. He passed on his love of woodworking to his son, son-in-law, and grandsons. He loved classic cars and could fix anything. He was known by everyone as an avid Oklahoma State Cowboy fan and was proud to call it his alma mater. He loved his family dearly and had a kind smile for everyone he met.

He had a wonderful voice and sang bass in church choirs and with the Barbershoppers for over 60 years. He is fondly remembered by his children and grandchildren for singing family favorites such as “Grandma’s Lie Soap”, “Hole in the Bottom of the Sea”, and “Oh Lord, It’s Hard to be Humble”.

He is preceded in death by his parents, Elmer and Blanche Krivy and his daughter, Linda David Crump.

To send flowers to the family or plant a tree in memory of Richard Lee Krivy, please visit our Heartfelt Sympathies Store.

Receive notifications about information and event scheduling for Richard

We encourage you to share your most beloved memories of Richard here, so that the family and other loved ones can always see it. You can upload cherished photographs, or share your favorite stories, and can even comment on those shared by others.

Posted Feb 02, 2020 at 02:19pm
My name is Scott McInnes, from Newcastle, England. I am very sorry for the loss of a lovely man. I worked for a company making cryogenic tanks, where I visited Duncan Oklahoma to visit the company Dick worked for at the time, Hydra Rig. I met Dick many times over the years he worked at Hydra Rig and always found him to be a true gentleman. Each time I met Dick, he was always very welcoming, encouraging and complimentary. He was also a very good engineer and maintained a lovely old Mercedes Benz. I recall Dick talking very fondly of his family and his true belief in God. My thoughts are with Dicks family and friends who no doubt loved him dearly.

Posted May 07, 2019 at 10:33pm
I am so sorry for the family’s loss. Death is one of the hardest trials to cope with. May you find comfort from the future promise recorded in Revelation 21:4 which says “he [God] will wipe out every tear from their eyes and death will be no more.” We have assurance from God’s word the Bible and we can be certain God will fulfill the words from his word.
Comment Share
Share via: 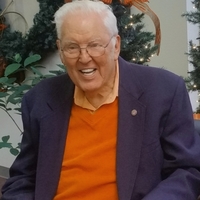