To share your memory on the wall of Leilah Harlin, sign in using one of the following options:

Provide comfort for the family of Leilah Harlin with a meaningful gesture of sympathy.

Print
Viewing will be 4-8pm Thursday, with family to greet friends from 6-8pm. Services will be 11am Friday in the South Colonial Chapel with burial to follow at Pilgrims Rest Cemetery in Newalla.


Leilah, 95, died Monday, May 27, 2019, ... Read More
Viewing will be 4-8pm Thursday, with family to greet friends from 6-8pm. Services will be 11am Friday in the South Colonial Chapel with burial to follow at Pilgrims Rest Cemetery in Newalla.


Leilah, 95, died Monday, May 27, 2019, after a brief illness. She was born on June 11, 1923, in Newalla, OK. She was the second-born behind her brother, Orbra Aaron Rogers, briefly preceding twin sister, Zeilah Maye Rogers, to parents Oscar Rogers & Ora Bell. She married William Harlin in a double ceremony with her identical twin sister, Zeilah Maye Rogers & Clyde Byron Harlin on D-Day, June 6, 1944, in Newalla, OK. Leilah graduated from McLoud High School in 1939. She attended Oklahoma Baptist University for two years and then completed a Bachelor of Music Education from OCU. While attending OCU, she became a member of Kappa Kappa Iota and remained active throughout her entire life. She taught school for 38 years and sang as a soprano in the choir for Kentucky Avenue Baptist Church in OKC for 74 years. She enjoyed singing, painting and making ceramics. Leilah was an avid traveler and her greatest joy was spending time with her family, especially her identical twin sister, Zeilah.

To send flowers to the family or plant a tree in memory of Leilah Faye Harlin (Rogers), please visit our Heartfelt Sympathies Store.

Receive notifications about information and event scheduling for Leilah

We encourage you to share your most beloved memories of Leilah here, so that the family and other loved ones can always see it. You can upload cherished photographs, or share your favorite stories, and can even comment on those shared by others.

Jay and Jennifer Graham sent flowers to the family of Leilah Faye Harlin (Rogers).
Show you care by sending flowers

Posted May 29, 2019 at 07:46am
I am so sorry for the family’s loss. Death is one of the hardest trials to cope with. May you find comfort from the future promise recorded in Isaiah 25:8 which says “he [God] will swallow up death forever.” We can be certain God will fulfill the words from his word the Bible.
Comment Share
Share via: 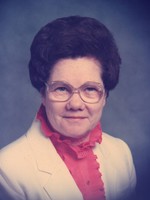