To share your memory on the wall of Mary Hanshew, sign in using one of the following options:

Provide comfort for the family of Mary Hanshew with a meaningful gesture of sympathy.

Kathryn Hanshew was born February 2, 1930 in Larned, Kansas the daughter of Anson and Kathryn Beatrice (Lewis) Horning. She completed this life on Monday, June 17, 2019 at the age of 89.

Kathryn came from a Kansas farming family. She and her husband Dudley left farming to move to Oklahoma where they owned several A&W Root Beer Drive-Ins starting in Ponca City and then in Oklahoma City. Kathryn sold residential real estate for several years.

She married Dudley Odis Hanshew on November 14, 1949. They had been members of St. John United Methodist Church where she sang in the choir as well as the Spiritful Voices Community Choir. She was an artist and enjoyed expressing herself through art.

She was preceded in death by her parents and her son, Timothy Lynn Hanshew on January 8, 2013.

To send flowers to the family or plant a tree in memory of Mary Kathryn Hanshew (Horning), please visit our Heartfelt Sympathies Store.

Receive notifications about information and event scheduling for Mary

We encourage you to share your most beloved memories of Mary here, so that the family and other loved ones can always see it. You can upload cherished photographs, or share your favorite stories, and can even comment on those shared by others.

Posted Jun 21, 2019 at 10:50am
In the past few days, I have been reflecting on all of the wonderful memories I have of my grandma. Aside from my mom, she was the most influential female in my life. She taught me how to be a wonderful wife, daughter, mother, and most importantly, human being. Many have spoken about her love for the arts and she shared that with all of her grandchildren. She instilled in me a love of music and musicals and took me to see several as a girl. Cats was her favorite and after she took me to see it, it’s my favorite too! She would also always tell a story about how I sang with her in a performance she was in at church. Although I don’t have much memory of it, I know it meant a lot to her. As I grew older, got married, and had a child of my own, she took great pride in having a great granddaughter. Even though Hannah is quiet and was also very timid around you, she loved you very much. Saying goodbye is never easy but I take comfort knowing you are at peace now. I love you grandma. Your impact on my life has been invaluable.
Comment Share
Share via:
PS

Posted Jun 19, 2019 at 09:04pm
Memories of Kathryn come to me, but most of all I think of words to describe her. Those words include accepting, gracious, family, and someone who I always felt comfortable around. During my childhood years with Duane and Tim she always made me feel as if I were another one of her boys. With any conversation we had, a few serious and many humorous, she always had a way of letting you know you were important to her. Kathryn knew that parts of my life weren't easy but she never showed pity toward me. Instead, she had a way somewhat like a mom or a sister of letting me know that she understood. As I work now through tears I want you all to know that I'm sharing your hurt but those memories will help to ease your pain. Kathryn I know that Myself, Ann, and both our girls are happy for the times we got to tell you we love you.
Comment Share
Share via:
DH

Posted Jun 19, 2019 at 11:18am
Upon reflection you were also a great mom to Bonnie, your daughter-in law since she lost her parents at an early age. You adopted her as one of your own and every time we came to visit you if she couldn't be there you would ask how's Bonnie. Bonnie also thought of you as mom and loved you with all her heart.
Comment Share
Share via:
DH

Posted Jun 18, 2019 at 11:09pm
What a great mom. From taking me and my friends fishing in our early teen years, jumping in and joining Bonnie and I in our booming Amway business in the early 70's and supporting all my wild business ideas over the years. She loved art and we took a couple of college art classes together. I just didn't get it and my stuff looked horrible but she excelled and became a really good artist. She was really disappointed in later years that she could not do her art but always said someday I will get back to that. She was so supportive that when I was getting a new business off the ground she worked as an artist and secretary for 2 years with no pay. She just said you can take care of me later. She had a beautiful voice and was always involved in not only church choir but also a Community Choir and we enjoyed going to hear her sing. Even laying in her bed in the final days she would sometimes sing answers to our questions and even maintained a sense of humor even though her body had given out and she was bed ridden. She loved the sun and when her and my dad had their lake house you could find her most days floating on her air mattress in the cove. Before she went to the nursing home she enjoyed sitting on the patio in the back yard in the sun with her dark sunglasses and sun hat. I would say it is hot out here but she would say it feels good to me and dad would have to drag her back inside before she got too much sun. She also enjoyed family get together's and really enjoyed the grand kids and was always available to babysit. Bonnie and I took dad to visit you every day in the nursing home for the last five months and those visits were such a blessing not only for you and dad but a special time for us as well. We love you mom and know that your little body just wore out before your mind and you are in a peaceful place and where Tim can take care of you now. Tell him hello and we think of him often.
Duane

Posted Jun 17, 2019 at 07:30pm
I am so sorry for the family’s loss. Death is one of the hardest trials to cope with. May you find comfort from the future promise recorded in Isaiah 25:8 which says “he [God] will swallow up death forever.” We have assurance from God’s word the Bible and we can be certain God will fulfill the words from his word.
Comment Share
Share via: 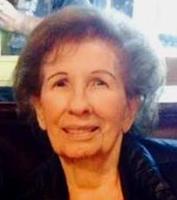 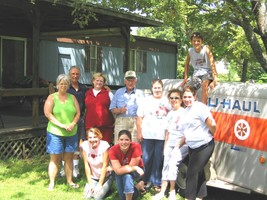 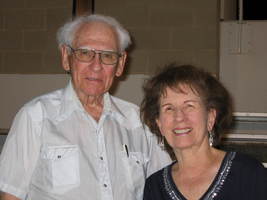