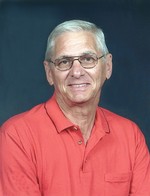 Viewing will be 4-8 PM Thurs. at the funeral home.

Jerry Horst, of OKC was born March 22, 1940 in Weatherford, OK to Theodore William & Lavena (Burnett) Horst. He passed away in OKC on June 25, 2019. Jerry attended & graduated from Weatherford public schools. On May 29, 1959, Jerry married his sweetheart, Shirley Mae Smith and together they shared 60 years of marriage, provided a loving home & raised their 3 daughters. He worked for AT&T as a supervisor, for 32 yrs, until his retirement. Jerry was a longtime active & faithful member of Moore First United Methodist Church. In his spare time, he enjoyed woodworking & most importantly, spending time with his family.

Jerry is preceded in death by his
Parents;
Daughter, Terri.
Sister, Annette Hardin