To share your memory on the wall of Shirley Breeden, sign in using one of the following options:

Provide comfort for the family of Shirley Breeden with a meaningful gesture of sympathy.


Shirley L. Breeden went to be with her Heavenly father on Friday, July 12, 2019 at the age of 83. The daughter of Earle Henry & Zella (Treaster) Fisher, she was born on September 12, 1935 in Oklahoma City, OK. She grew up in Perkins, and moved to Stillwater at the age of 6, where she began working at a young age operating elevators at Oklahoma State University. After graduating from Stillwater high school, Shirley continued working for the University in food services in the student union. She later worked for Oklahoma City public schools cafeteria, and then canteen services. On Dec. 31, 1962, she married her sweetheart, Bennie Breeden. Together they shared more than 53 years of marriage, and were blessed with 2 children. Shirley was very passionate about antiquing, taking historical home tours, animal rescue of any kind, and her weekly coffee visits with Joyce & Wes Haggard. As the matriarch, Shirley loved and cared deeply for her family, but especially adored her grandchildren and great grandchildren. She will be held close to our hearts each day. She was preceded in death by her parents; husband, Bennie in 2015; & Uncle Bert Treaster. She leaves behind her loving family: son, Randy Breeden & wife Michelle; daughter, Rhonda Reaves and her husband, Hank; grandchildren: Zac & wife Brenna; Matt & wife Andi; Casi & husband Clayton; Clay & wife Morgan; 11 great grandchildren, as well as many other extended family, friends & her beloved cats.

We encourage you to share your most beloved memories of Shirley here, so that the family and other loved ones can always see it. You can upload cherished photographs, or share your favorite stories, and can even comment on those shared by others.

Linda & Greg Jones, Janis Mollman, and others have sent flowers to the family of Shirley Louise Breeden (Fisher).
Show you care by sending flowers

Posted Jul 15, 2019 at 11:01pm
We pray the love of God enfolds you during your journey through grief. Aunt Shirley will always be in our hearts. Our thoughts and prayers go with you

Posted Jul 15, 2019 at 05:15pm
Randy, Rhonda, & Family, your mama was one of the most loving and caring person I knew. She always had a smile, hug and hello at the birthday parties, holidays and family gatherings. I love her stories and great ideas for life moments, she could always make you smile. Thank you for sharing her, she will be dearly missed and always loved. Sending prayers of God's loving arms wrapped around you and the family for grace, peace and healing. Love you Always, The Crowley's (Cliff, Deann & Garrett) P.S. We love you all very, very much; hugs. Posted Jul 15, 2019 at 10:23am
Our thoughts and prayers are with you. Wally & Sherry Gillispie, Dale & Sharon Garrett, Tim and Tonya Bales

Flowers were purchased for the family of Shirley Breeden. Send Flowers

Wilma, Mykala and Jeff, Shane and Amber, Chance an

Posted Jul 12, 2019 at 06:57pm
Our thoughts and prayers are with you and you family. "SHIRLEY" will remain in your hearts forever.

Wilma, Mykala and Jeff, Shane and Amber, Chance an purchased flowers for the family of Shirley Breeden. Send Flowers 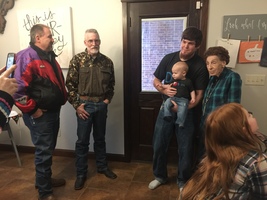