To share your memory on the wall of Virginia "Lorene" New, sign in using one of the following options:

Provide comfort for the family of Virginia "Lorene" New with a meaningful gesture of sympathy.

Virginia “Lorene” New was born October 9, 1925 in Trousdale, OK the daughter of Ira P and Margaret (Howard) Stafford. She entered heaven on Friday, September 20, 2019 at the age of 93.

Lorene graduated from Wanette High School then went on to become a licensed beautician. Lorene married L.D. “Deacon” New on August 9, 1948 in Shawnee, Oklahoma. They lived in Norman, Madill, Tulsa and settled in Oklahoma City where they raised their family. She was a faithful member of Metropolitan Baptist Church. She and Deacon enjoyed many friends, travel and lots of time at their get-away at Lake Texoma. After the death of Deacon in 1998, she moved to Spanish Cove retirement community in 2002 where she enjoyed many more years of gardening and new friendships.

Lorene was preceded in death by her parents; her husband; and her son, Michael New. She is survived by her daughters, Beth Perry (Rick) of Broken Arrow, Barbara Wyckoff (Bruce) of Oklahoma City, her son, Tim New of Cookson, OK, and her special daughter-in-law, Sherrell New of Oklahoma City; her grandchildren, Sarah Godbehere (Ryan), Joshua Perry (Kelsey), Gene Wyckoff (Sara), Matthew Perry (Cassie), Jodie Wyckoff, and Casey New; and her great grandchildren, Gage and Tenley Perry and Reese Wyckoff.

The family will receive visitors from 6:00 until 8:00 p.m. Monday at Vondel Smith Mortuary North, 13125 N. MacArthur Blvd. Funeral services will be 1:00, Tuesday, Sept. 24 at Metropolitan Baptist Church. Private entombment will be in Resurrection Cemetery Mausoleum.

To send flowers to the family or plant a tree in memory of Virginia "Lorene" Irene New (Stafford), please visit our Heartfelt Sympathies Store.

Receive notifications about information and event scheduling for Virginia "Lorene"

We encourage you to share your most beloved memories of Virginia "Lorene" here, so that the family and other loved ones can always see it. You can upload cherished photographs, or share your favorite stories, and can even comment on those shared by others.

Posted Sep 22, 2019 at 08:05pm
Beth, Rick & family: Please accept our most heartfelt sympathies for your loss. Our thoughts are with you and your family during this difficult time. 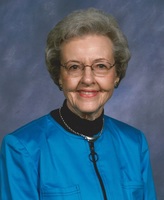