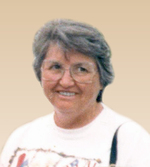 Vonda (Castle) Basden, 88, passed away Sunday, November 10th, 2019, in Oklahoma City. She was born June 6, 1931, in Jet, Oklahoma to Boyd and Delia Castle. She was one of 6 children raised on a family farm so working was part of daily life. They moved to Guthrie in 1947 where she attended and graduated from Guthrie High School 1949. Shortly thereafter, she moved to Oklahoma City, getting a secretarial position at Tinker Air Force Base where she met her future husband, Charles Basden, Jr. She wed the love of her life, “Chuck” on March 1, 1951, and they were blessed with two children, Karen and Larry. Vonda and Chuck were married for 40 years until his death in May of 1991. Vonda was employed with Tinker Air Force Base for 26 years. During her time at TAFB, she worked in the Air Force Communications Command Division as a Communications Management Specialist and worked her way up the ladder, eventually becoming a GS 12 before she retired. Shortly after her retirement, Vonda and her daughter, Karen, opened Country Collections by Hart, an arts and crafts store in downtown Moore. They had the shop for close to 30 years and developed many friendships and loyal customers during that time. Vonda enjoyed sewing and quilting. She was an excellent seamstress as well. She made quilts for numerous family and friends and even made drapes for her son and daughter- in-law. Vonda was a very quiet woman, but stood firmly for things she believed in especially when it came to her family. Vonda was a longtime member of Sunny Lane United Methodist Church in Del City. She was extremely giving and kind-natured. If anyone was in need, she was always willing to step in and help them out. Vonda will be deeply missed by all.