To share your memory on the wall of Mary "Gerrie" Cox, sign in using one of the following options:

Provide comfort for the family of Mary "Gerrie" Cox with a meaningful gesture of sympathy.

Print
Please check back on Tuesday for Gerrie's obituary

Mary, or “Gerrie” as most knew her, was born on Christmas Day in 1932 to William Virgil “W.V” & Pearl May (Cole) Farrow in Seward, Oklahoma. Her father was a section foreman for the Santa Fe Railroad. When her older sister started to school, Gerrie went to school with along with her. She was not old enough to attend but loved school so much they let her stay. It was a one room school for grades 1 through 8. She thought it was fun to see if she could do what the older kids did. Her parents moved to Kendrick, Ok where Gerrie started the 6th grade. During her childhood in Kendrick she played basketball and excelled in school. She graduated from high school in 1950 and was valedictorian of her class. She wanted to go to college but didn’t think her parents could afford it. She had met William “Bill” Cox and knew they would someday get married. In March of 1951, Bill was drafted into the army. Gerrie and Bill were married in July 23, 1951 in Hinesville, Georgia. Bill was stationed in Georgia and later in Philadelphia, Pennsylvania. Gerrie worked various jobs in these places. It was a new experience for her being so different from the sheltered life she had in Oklahoma. Bill had worked in a bakery when he was younger and served as a cook in the army. Bill was released from active duty March 15, 1953. In November of 1955, Bill and Gerrie opened a bakery in Chandler. They operated the bakery for 36 years and made some of the best memories and friendships of their life. In addition to Co-owning and operating the bakery, Gerrie was also a cake decorator. Bill and Gerrie were blessed with two daughters, Patti and Jeanne. Gerrie loved being a mother and was determined to raise her daughter’s right. Gerrie and Bill were active members at the First Baptist Church of Chandler for many years. Gerrie served as a Sunday school teacher and also served as a member of the Oklahoma Baptist Disaster Relief Team. Gerrie and Bill spent over 51 years together until his death in 2002. Gerrie had a close group of family and friends in Chandler which really helped her to cope with the loss of Bill. In 2008 Gerrie made the decision to move to Oklahoma City to be closer to her daughters, grandchildren and great grandchildren. Not long after moving to the city, she made many friendships with her neighbors in Autumn Leaves and became an active member at Southern Hills Baptist Church. She helped with the churches ESL (English As a Second Language) group for many years and was active in her Sunday School Class. Not only was Gerrie was a devout Christian but she was also as a determined gardener. She enjoyed taking care of her flowers and worked hard to make everything look picture perfect. Although she is gone she will always be remembered for her sweet spirit and positive outlook on life.

We encourage you to share your most beloved memories of Mary "Gerrie" Cox here, so that the family and other loved ones can always see it. You can upload cherished photographs, or share your favorite stories, and can even comment on those shared by others.

Greg & Kim Huffman, Gayle Fowble Cullum, and others have sent flowers to the family of Mary "Gerrie" Cox.
Show you care by sending flowers

Posted Dec 04, 2019 at 11:26pm
I remember how great the bakery was that Gerrie ran. Never be another ‘down home’ bakery like it was. May she be remembered always and Rest In Peace.
Jana (Tetirick) McElyea
Comment Share
Share via:
HS

Posted Dec 04, 2019 at 09:59am
Please accept our most heartfelt sympathies for your loss... Our thoughts are with you and your family during this difficult time.

Flowers were purchased for the family of Mary "Gerrie" Cox. Send Flowers

Posted Dec 03, 2019 at 11:32am
Are thoughts and prayers are with you Jerri, may you rest in peace. Jeanie and Paul, we are thinking of you during these difficult times.

Posted Dec 02, 2019 at 01:48pm
So sorry for your loss. May God grant you peace and comfort during this difficult time. Loving memories of her will forever be in my heart.

Posted Dec 02, 2019 at 10:10am
Our hearts and prayers are with you and the family. May the Creator walk and be with you during this time to guide and help heal. With all our love. 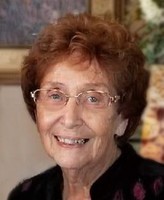