To share your memory on the wall of Tommy Deplois, sign in using one of the following options:

Provide comfort for the family of Tommy Deplois with a meaningful gesture of sympathy.

We encourage you to share your most beloved memories of Tommy here, so that the family and other loved ones can always see it. You can upload cherished photographs, or share your favorite stories, and can even comment on those shared by others.

Posted Dec 18, 2019 at 04:29pm
Tom worked with my father, Harry Koeppel, at Sohio Petroleum. My dad always thought the world of Tom!!!
I was lucky enough to have met Tom and Veronica and send my condolences to Nancy and her family.
After 74 years of married life, can you just imagine how happy they are in Heaven to see each other again!!
Sincerely, Beth Koeppel Plant
Comment Share
Share via:
CC

Posted Dec 15, 2019 at 05:20pm
In memory of a wonderful man who truly made a difference in my life. Keeping Nancy, Tony and their family in my prayers. 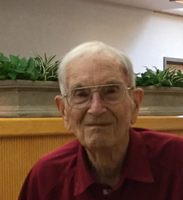