To share your memory on the wall of Freda Mulhall, sign in using one of the following options:


Sunday from 12-8 PM
Monday the family will be present to greet friends from 5- 8 PM.


Sunday from 12-8 PM
Monday the family will be present to greet friends from 5- 8 PM.


FREDA MAE BERKENBILE, MAUGHAN, MULHALL
Was born on December 5, 1924 at Dover, Oklahoma, the second child of Fritz Walter and Mary Vina (Perry) Berkenbile. The family soon moved to Arkansas where Fritz found work as a farm hand. He died in 1927 leaving his pregnant wife and two small children. The young family eventually moved to Hennessey, Kingfisher County, Oklahoma where they lived with relatives for two years.
When she was seven years old Freda’s family moved east of town where they joined the Union Chapel Church and Freda attended the one room Lone Star School. She graduated from Hennessey High School in 1942.
Freda had a strong work ethic all her life. When she was 11 years old she hired out to a neighboring family to do cooking, cleaning and milking the cows, living with the family during the week, going home on Sundays to go to church and be with her mom and siblings. She turned her summer’s earnings over to her mother for family living expenses. The United States was in the Great Depression and every penny counted.
After high school Freda moved to El Paso, Texas to live with an aunt. She got a job at Briggs Air Force Base doing clerical work. While there she met a young soldier, Paul Maughan, who was stationed at Ft. Bliss Army Base. Paul was deployed to the South Pacific during the war and Freda moved back to the Hennessey area. After the war was over they moved to Enid. They had four children. Paul and Freda divorced in 1967. Freda married Gerald Mulhall in 1971 and they made their home in Oklahoma City. He died in 1982.
In 1957 Freda went to Enid Business College and gained skills to help her get jobs to provide for her family. She worked for several companies during the next 25 years. Having been the parent of a paraplegic child, Freda learned many nursing skills. In 1984, at the age of 60, she began doing home health care; first for people in her neighborhood and later as a full-time time occupation. In 2016 her last client, who suffered a foot fracture, actually moved into Freda’s home for care until she recovered. Freda retired from that work in 2016 at the age of 92.
Through her grandson’s bid for political office, Freda became involved in helping with political campaigns and worked both as a paid worker and as a volunteer for several candidates from 2004 through 2018. The other workers called her “Grandma” and she treated them like family.
Freda always had a garden in her back yard and spent many days planting, tilling and harvesting her crops. She was generous to share her produce with family and friends. She loved looking at seed catalogues and planning for next year.
She was an active member of Crown Heights Baptist Church and was faithful to attend until her health prevented it.
Freda was preceded in death by her husband, Gerald, her daughter, Paula Jo Maughan, her parents, and her brother Dale Lee Berkenbile and her son-in-law, Robert Claude Spurlock. She is survived by her sister, Lois Long of Oklahoma City; daughters Dale Lopez and husband Roy of Glendale, CA; Rae Ann Spurlock, Lawton, OK; and son Roy Maughan and wife Charlotte of Oklahoma City, OK. Four grandchildren: Janna R. Lopez, Michael Lopez, Brian Maughan, and Ashley Webb and five great grandchildren: Sydney, Alexis, Clayton, Raegan and DeAndrae
Read Less

To send flowers to the family or plant a tree in memory of Freda Mae Mulhall, please visit our Heartfelt Sympathies Store.

Receive notifications about information and event scheduling for Freda

We encourage you to share your most beloved memories of Freda here, so that the family and other loved ones can always see it. You can upload cherished photographs, or share your favorite stories, and can even comment on those shared by others.

Patricia and Robert Morgan, Gary & Rosa Maughan, and other have sent flowers to the family of Freda Mae Mulhall.
Show you care by sending flowers

Guaranteed hand delivery by a local florist
AS

Posted Dec 16, 2019 at 07:42pm
Sorry to hear of Freda's passing. I am Louise Spray's daughter. I mostly remember Freda from when I was a child . Also we saw her at family funerals.

Thinking of all of you at this difficult time.

Flowers were purchased and a memorial tree planted for the family of Freda Mulhall. Send Flowers

Patricia and Robert Morgan purchased flowers and planted a memorial tree for the family of Freda Mulhall. Send Flowers

Posted Dec 16, 2019 at 01:25pm
Brian your loss, becomes all of our loss. Our thoughts and prayers are with you and your family. Budd Hoaas and everyone at OAMSI.

Flowers were purchased for the family of Freda Mulhall. Send Flowers

Posted Dec 16, 2019 at 08:25am
Please accept our most heartfelt sympathies for your loss... Our thoughts are with you and your family during this difficult time. 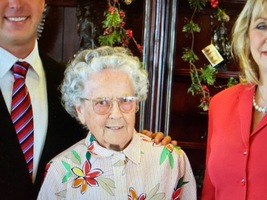 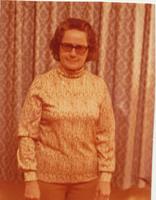