To share your memory on the wall of Donald Norris, sign in using one of the following options:

He was an avid golfer achieving one hole-in-one for which he was very proud. He was very devoted to his family and was a friend to all he met. He planned numerous family reunions including immediate and extended family members. Following retirement he researched and compiled genealogical data for both his and Evelyn’s family. These investigations lead to a great deal of travel, visiting cemeteries and court house records to gather information for his project.

During his working career he served on numerous boards and committees related to the National Rural Electric Cooperative Association. He served as President for the National Rural Utilities Cooperative Finance Corporation. He was interviewed on one occasion by the late radio show personality Paul Harvey to get “The rest of the story.” Also, during his career he was summoned, along with several other cooperative managers, to the White House for a meeting with President Jimmy Carter about the energy crisis.

He was a lifelong United Methodist having held many positions of leadership in the church.
He was a proud World War II veteran serving in the army during the occupation of Germany and attended the Nuremberg Trials.

In lieu of flowers, the family asks that memorial donations be made to the American Cancer Society or the Wounded Warrior Project. A memorial service celebrating Don’s life will be held March 20, at Church of the Servant in Oklahoma City.

To send flowers to the family or plant a tree in memory of Donald Richard Norris, please visit our Heartfelt Sympathies Store.

Posted Dec 31, 2019 at 12:34pm
So sorry to hear of Don's passing. Have many wonderful and fond memories of Don and Evelyn from working at Eastern Iowa Light and Power and living in Wilton, IA. My dad worked at the REC for many many years and truly loved his job and the people he worked with. Please give Evelyn hugs from us. Sending our sympathy, love, and prayers to you all from the Ed and Mary McQuillen family. Kandi Dieckman - 615 East 6th St. - Wilton, IA 52778

Posted Dec 29, 2019 at 10:19am
Don Norris was a very special human being. He contributed much to the community of Winchester Kentucky, not only by his charitable works and dedication to East Kentucky Power Cooperative but, more importantly, by the many friends he made and his dedicated approach to life and to his friends.
Will Hodgkin
Retired President, First Security Bank (Chase Bank)
Comment Share
Share via: 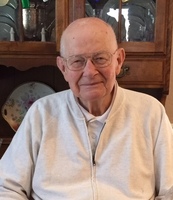