To share your memory on the wall of Don Bates, sign in using one of the following options:

Provide comfort for the family of Don Bates with a meaningful gesture of sympathy.

A Celebration of Life will be held 1 P.M. Tues. Dec. 31, 2019 at Faith Ta... Read More
Visitation will begin Sunday from 12-8 PM with the family present from 3-5 to greet friends at the funeral home an additional viewing will be on Monday from 4-8 PM

Memorials may be made to: Feeding 5000 in care of Faith Tabernacle.

In 1952, Don began working at Wilson’s Food at the Oklahoma City Stockyards, where he completed 40 years of employment as a butcher when the plant closed in 1992. While working at Wilson’s Food, Don also received a call into the ministry, initially providing pulpit supply and leadership in their home church Newcastle Assembly of God. In 1972 he was asked to serve as the pastor of the Full Gospel Pentecostal Church of Dibble for approximately four years. Afterwards, he would offer short-term pastoral supply to various independent churches in the area. Because he was working at Wilson’s Foods and providing Pastoral Ministry at the same time, Don would travel from his home in the Blanchard/Newcastle area to go to work at Wilson’s food at 5am , get off work at 3pm in afternoon (unless there was overtime) then drive to Dibble/Blanchard areas most evenings to do visitation and conduct services.

After retiring from Wilson Foods, he began working with his son in “Don Bates Homes” building homes throughout the Yukon/Mustang area. In the last few years Don began a mowing service, mowing the campus of Faith Tabernacle/Faith Church and the acreages of others until his first heart attack in August, 2019.

During a trip to California in the 1960’s they attended a revival meeting that his sister-in-law coordinated with their pastor. It was during this revival that Don and Shirley accepted Jesus and it changed the rest of their lives and altered their family history. They became devoted followers of Jesus, actively serving/volunteering in ministry. Don and Shirley began attending Faith Tabernacle in the 1980’s. After Shirley passed away in February of 2007, Don met Patricia Ann Collins on a Faith Tabernacle Senior Adult Trip to Branson, Missouri and they later married on October 18, 2008. Don and “Pat” (Patricia) continued attending Faith Tabernacle where he became known as the “Donut Hole” man, bringing donuts to his grandkids at church (and it expanded to others), in addition to bringing donuts to his Bible Class each Sunday.

To send flowers to the family or plant a tree in memory of Don H Bates, please visit our Heartfelt Sympathies Store.

Receive notifications about information and event scheduling for Don

We encourage you to share your most beloved memories of Don here, so that the family and other loved ones can always see it. You can upload cherished photographs, or share your favorite stories, and can even comment on those shared by others.

Posted Dec 30, 2019 at 11:07pm
Pastor Bates, I wish I had words to lighten your pain, but sometimes words are just not enough, Please accept my deepest condolences on the loss of your father, May God comfort your hearts in your time of grief, our thoughts and prayers are with you and family.
Sincerely, Monica Britt-Onyema
Dallas, TX
Comment Share
Share via:
HS

Posted Dec 28, 2019 at 11:44am
We are thinking of you during this difficult time. We love you all dearly! Praying for peace and comfort. From your OKC Faith Church Family.

Flowers were purchased for the family of Don Bates. Send Flowers

Flowers were purchased for the family of Don Bates. Send Flowers 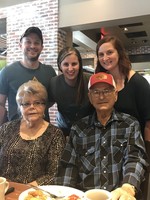