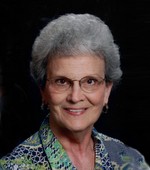 Memorials may be made to Southern Hills Baptist Church Senior Adult Ministry https://www.myshbc.com/senior-adult-ministry.

Delma Rhea Staples earned her angel wings on Wednesday at the age of 79. She was born in Oklahoma City to Morris and Juanita (Edwards) Shipman. On July 20, 1957, Delma married her one true love, Cecil Norman Staples & together shared more than 62 years of marriage & raising a family. In 1971, the family moved from Mountain Home Air Force Base, Idaho to OKC. Delma worked for OKC Public Schools for more than 25 years before retiring. She was a longtime member of Southern Hills Baptist Church where she enjoyed singing in the choir and cooking for the youth camps at Falls Creek for 5 years. In her spare time, Delma also enjoyed hobbies such as gardening, crocheting, and sewing. Delma also enjoyed making cakes and cooking in general as she was a very talented cook. But nothing was as important to her as serving the Lord and spending time with her family. Delma was known for her love of cooking, playing cards and dominoes. She will be remembered for her delicious Christmas cookies, homemade candies, and funny wise crack jokes. She will be deeply missed by all.