To share your memory on the wall of Bill B. Byers, sign in using one of the following options:

Provide comfort for the family by sending flowers or planting a tree in memory of Bill B. Byers

Provide comfort for the family of Bill B. Byers with a meaningful gesture of sympathy.

Bill served in WWII with the 300th Combat Engineers. The Combat Engineers landed on Utah Beach and built bridges across France, Belgium, and Germany. He received all five Battle Stars in the European Theater.

Upon returning from the war, he met and married Louise Cole in Blanchard, OK. They later moved to Altus where they raised three daughters. Bill and his brother, Jack, co-owned Byers Construction Company. Together they built several hundred homes in Altus, Elk City, and Surrey Hills in Yukon, Oklahoma.

At retirement, Bill and Louise moved to Yukon, Oklahoma, where they lived on the golf course in Surrey Hills. Bill was an avid golfer and had numerous ‘Holes in One’. Bill also loved hunting, the Dallas Cowboys, and any sport his grandchildren were playing. He never missed a ball game, dance recital, cheer or pom performance, and loved every minute of it.

Bill was fortunate enough to return to Normandy France for the 70th Anniversary of the D-Day invasion. Bill was honored with numerous celebrations by the French people and awarded the French Legion of Honor.

To send flowers to the family or plant a tree in memory of Bill B. Byers, please visit our Heartfelt Sympathies Store.

Receive notifications about information and event scheduling for Bill B. Byers

Receive text or email updates for Bill B. Byers

We encourage you to share your most beloved memories of Bill B. Byers here, so that the family and other loved ones can always see it. You can upload cherished photographs, or share your favorite stories, and can even comment on those shared by others.

From Roger Byers and Family, Donna Caldwell, and others have sent flowers to the family of Bill B. Byers.
Show you care by sending flowers

From Roger Byers and Family

From Roger Byers and Family purchased flowers for the family of Bill B. Byers. Send Flowers

Posted Jan 07, 2020 at 02:44pm
I will always remember what a sweeet man your father was and will treasure that I have one of his mantles in my living room. I will remember him each time I look at it. My prayers are that you heal quickly and replace your sadness with happy memories. Much Love, MarySue Green
Comment Share
Share via:
TF

Donna Caldwell purchased flowers for the family of Bill B. Byers. Send Flowers

Posted Jan 05, 2020 at 10:26pm
Peace, Prayers and Blessings for our dear Uncle Bill Byers, Sent with Love and Remembrance from The Remington Family 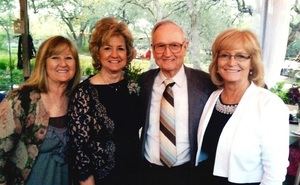