Obituary for Bill B. Byers 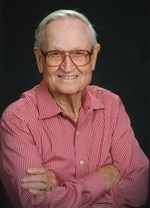 Bill served in WWII with the 300th Combat Engineers. The Combat Engineers landed on Utah Beach and built bridges across France, Belgium, and Germany. He received all five Battle Stars in the European Theater.

Upon returning from the war, he met and married Louise Cole in Blanchard, OK. They later moved to Altus where they raised three daughters. Bill and his brother, Jack, co-owned Byers Construction Company. Together they built several hundred homes in Altus, Elk City, and Surrey Hills in Yukon, Oklahoma.

At retirement, Bill and Louise moved to Yukon, Oklahoma, where they lived on the golf course in Surrey Hills. Bill was an avid golfer and had numerous ‘Holes in One’. Bill also loved hunting, the Dallas Cowboys, and any sport his grandchildren were playing. He never missed a ball game, dance recital, cheer or pom performance, and loved every minute of it.

Bill was fortunate enough to return to Normandy France for the 70th Anniversary of the D-Day invasion. Bill was honored with numerous celebrations by the French people and awarded the French Legion of Honor.