To share your memory on the wall of Milton Krause, sign in using one of the following options:

Provide comfort for the family of Milton Krause with a meaningful gesture of sympathy.

Print
Milton Earl Krause was born July 12, 1925 in Herington, KS the son of Clarence Walter and Vera Ida (Stroth) Krause. He completed this life on Thursday, January 23, 2020 at the age of 94.

Milton was raised in Kansas where he graduated fro... Read More
Milton Earl Krause was born July 12, 1925 in Herington, KS the son of Clarence Walter and Vera Ida (Stroth) Krause. He completed this life on Thursday, January 23, 2020 at the age of 94.

Milton was raised in Kansas where he graduated from Chapman High School. He received a Bachelor’s Degree in Accounting from U.C.L.A.. He was an accountant and controller in the oil and gas industry for many years.

Milton served in the U.S. Navy during both World War II and the Korean Conflict.

He was preceded in death by his parents and his sister, Lorna Mae Meier.

Committal with military honors will be 10:00 AM Friday at Fort Sill National Cemetery. Memorial service will be 2:00 PM Friday at St. Paul’s Lutheran Church.

We encourage you to share your most beloved memories of Milton here, so that the family and other loved ones can always see it. You can upload cherished photographs, or share your favorite stories, and can even comment on those shared by others.

Posted Jan 30, 2020 at 06:38am
Wishing you peace to bring comfort, courage to face the days ahead and loving memories to forever hold in your hearts.

Flowers were purchased for the family of Milton Krause. Send Flowers

Posted Jan 26, 2020 at 02:42pm
Milton and Mid were some of my favorite people for several years at Legend Senior Living and Milt and I shared many trips to Walmart and other appointments and became good friends over their time at Legend. Mid you are also a special person to me and I Pray you will remember the good times with Milt and know that he is complete in the presence of Jesus and remember that Jesus loves you and I do to through Him... Your Friend, Dennis Thompson, Chauffeur Legend Senior Living

Posted Jan 24, 2020 at 09:40am
With heartfelt condolences, Your families are in our thoughts and prayers 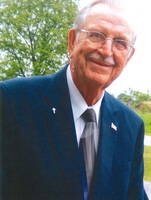