To share your memory on the wall of Donald Brooks, sign in using one of the following options:

Provide comfort for the family of Donald Brooks with a meaningful gesture of sympathy.

Print
Donald Wayne Brooks was born on April 12, 1928 in Clarksville, Arkansas, the son of Tassie and Lester Brooks. He completed this life on Saturday, January 25, 2020 at the age of 91 after a prolonged battle with cancer.

Donald met the lov... Read More
Donald Wayne Brooks was born on April 12, 1928 in Clarksville, Arkansas, the son of Tassie and Lester Brooks. He completed this life on Saturday, January 25, 2020 at the age of 91 after a prolonged battle with cancer.

Donald met the love of his life, Marilou Brodell, while working at OG&E in 1953, and they married on August 18, 1955. The two made their home in Oklahoma City where they raised their children in the Windsor Hills area. Don lost his beautiful bride four years ago, and not a day went by that he did not miss his MB with his whole heart.

Don was a Korean War veteran who proudly served in the Army’s 45th Infantry Division as Sergeant First Class in the 158th Field Artillery Battalion. Following his service and after his employment with OG&E, he went on to find great success as a sales representative for Joslyn Manufacturing Company before becoming a partner at TF Sears and later starting his own company as a representative for electrical equipment manufacturing companies. Don was a born salesman and leader, gregarious and charismatic, and as the life of the party, he always had a funny story or joke to tell. People were drawn to Don because of his genuine warmth and humor as well as his kind heart and wisdom. His famous sayings will live on for generations to come, and his vacation motto is one of everyone’s favorite, “We did not come here to save money or lose weight!”

Don was a loving and wonderful provider to his wife and children and a fiercely loyal and generous friend. Don and Marilou were members of Crown Heights Methodist Church in their early married years, and they made many lifelong friends. They were members of the Oklahoma City Ski Club, and Don served as President of the group for a time. There were countless overnight bus trips to ski resorts in Colorado, and many fond memories and friends were made. Don shared his love for golf with Marilou, and after moving to north Oklahoma City, they joined Quail Creek Country Club where they became very involved and made even more friends. The two traveled the world together and took their children and grandchildren on many wonderful vacations because keeping their family close was a priority to them. Don attended the University of Oklahoma and was an avid Sooner fan who had season football tickets for over 50 years. His love for OU inspired his children to become Sooners themselves.

Don honestly considered himself to be young even at 90, and he often talked about the “old” people at the retirement community where he lived. He seemed to think that he would live forever, and it was only due to his sheer grit, determination and fighting spirit that he lived as long as he did.

Don is survived his son, David Wayne Brooks and his wife Jamie of Coppell, Texas; his daughter, Elizabeth Luecke of Oklahoma City; his grandchildren, Elaina Carr and her husband Steven, Dalton Brooks, Emma Luecke, Olivia Brooks and Maribeth Luecke; and his brother, Morris and wife Ann of Grove, Oklahoma. He was preceded in death by his wife of 60 years, Marilou Brodell Brooks, and his father and stepmother, Lester and Beatrice Brooks and his mother, Tassie Jaggers Brooks.

A funeral service will be held at 2:00 p.m., Tuesday, February 4 in the chapel of Vondel Smith Mortuary North, 13125 N. MacArthur Blvd. Interment will follow in Chapel Hill Memorial Gardens.

Posted Jan 29, 2020 at 06:04pm
Elizibeth, David and family,
We are praying for you as you adjust to your Dad/grandfather’s absence from you to
Join your Mom/grandmother in Heaven.
May your memories be sweet and bring comfort. Don and Marilou were dear friends for
many years and we were blessed to know them.
Judy and Bob Lowrey
Comment Share
Share via: 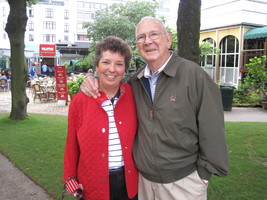