To share your memory on the wall of Clarence Kirby, sign in using one of the following options:

Visitation will be 4-8pm on Saturday and 12-8pm on Sunday. The family will be present at the funeral home from 2:00pm to 4:00pm on Sunday to greet f... Read More
Vondel L. Smith & Son Morutary at South Lakes 4000 SW 119th Oklahoma City, Oklahoma

Visitation will be 4-8pm on Saturday and 12-8pm on Sunday. The family will be present at the funeral home from 2:00pm to 4:00pm on Sunday to greet friends.

Clarence Lavern “Pete” Kirby was born February 24, 1928 in Big Four, Oklahoma. He was the son of Maggie McClure and George Kirby, whom are deceased. His sister would pull him around in a wagon and say “gitty-up” Pete, thus his nickname of Pete would forever be. He has 2 deceased brothers (Chuck and Clifford) and two deceased sisters (Vi and Bernice). He has one remaining brother (Curtis Kirby) and one sister (Chris McClure). He was trained and became an expert ‘die maker’ for a box manufacturing company in Weleetka, Oklahoma for several years while raising his family. He has one daughter, Teresa and her husband, Randy Dearman of Moore, OK and one son, Steve Kirby of Oklahoma City. He later moved his family to Oklahoma City to work at Rock Ten Box Company as the plant manager in the same industry.

After his marriage to Judy, he changed careers and became an expert in the buying and selling of antiques and collectables. It was very interesting walking with him at an estate sale or garage sale. He could tell the history of what he was viewing and provide wholesale and retail values. He would mention the manufacturer and the approximate date the item was created. He and Judy worked hard in the family business and owned Kirbyville Flea Market for many years, which included a café that they personally operated. They retired from their business about 15 years ago. He and Judy enjoyed fishing, visiting different casinos and playing the slot machines and traveling together for many years.

Pete was a kind-hearted man with a gentle and meek spirit with strong convictions. He was not a vengeful person even when he was treated badly and he was generous when someone needed a helping hand. He was generally a quiet man and enjoyed one on one conversations. His daughter states that one of her favorite songs growing up that her Dad always played for her that taught her many life’s lessons was “Big Girls Don’t Cry” by the Four Season. He raised us to have strong values and to be able to stand on our two feet and not rely on others. Pete had an ornery side that always kept you guessing on what he would say or do to keep you on your toes. Even in his last remaining days, his ongoing response to nurses when asked if he was having a good day, would be “It’s a good day in the neighborhood”. When his daughters would ask him how he felt, he would turn it around quickly and always say “Good” – how are you feeling? When asked if he was in pain, he would always state “No”, when you knew he really was. Pete loved his wife Judy deeply and they were truly the “best of friends”, he wished the very best for his children, loved his 2 Son-in-laws fiercely and always said he had the very best and that they don’t make men like them anymore. He loved us all unconditionally.
Read Less

To send flowers to the family or plant a tree in memory of Clarence Lavern "Pete" Kirby, please visit our Heartfelt Sympathies Store.

We encourage you to share your most beloved memories of Clarence here, so that the family and other loved ones can always see it. You can upload cherished photographs, or share your favorite stories, and can even comment on those shared by others. 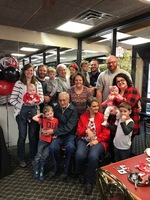 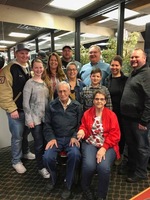