To share your memory on the wall of Robert Williamson, sign in using one of the following options:

Robert Stanley Williamson was born on July 22, 1927 in Merrill, Iowa to Robert George and Margaret May (McCauley) Williamson. He passed on to the next life t... Read More
ROBERT STANLEY WILLIAMSON
July 22, 1927 – March 12, 2020

Robert Stanley Williamson was born on July 22, 1927 in Merrill, Iowa to Robert George and Margaret May (McCauley) Williamson. He passed on to the next life to be with his wife Virginia on March 12, 2020. In addition to his parents and his wife, he was preceded in death by his sister Blanche Helm and his grandson Landon Biggers.

Robert attended Central High School in Sioux City, Iowa. After graduation, he enlisted in the Navy in 1945 and served on the USS Wisconsin until 1946. He graduated from the University of Iowa and the Thunderbird School of Global Management in Phoenix, Arizona.

Following his marriage to Virginia in 1954, they moved to Mexico City with General Electric. They spent 15 years there where all three of their daughters were born. He is survived by those daughters, Martha Rugeley and husband Kent of Oklahoma City, Mollie Biggers and her husband Doug of La Quinta, California, and Sarah Williamson of Madrid Spain. He is also survived by seven grandchildren and five great grandchildren.

Bob touched many lives during his forty-three years as a friend of Bill W. This was evident with the number of visitors that came to see him in recent days. He was a wonderful friend and support to many.

Although he faced many physical challenges following a stroke in 2008, he maintained a positive attitude and a smile on his face. He especially enjoyed visits from his grandchildren and great grandchildren.

To send flowers to the family or plant a tree in memory of Robert Stanley Williamson, please visit our Heartfelt Sympathies Store.

Posted Jun 19, 2020 at 04:28pm
With our sympathies from your friends in Management Accounting.

Flowers were purchased and a memorial tree planted for the family of Robert Williamson. Send Flowers 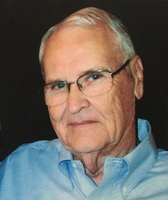