To share your memory on the wall of James \"Jim\" Wallace, sign in using one of the following options:

Jim was a special individual to his family and his friends. He will be greatly missed. In lieu of flowers the family requests donations be made to The Encourager Food Closet, Southern Hills Baptist Church, 8601 S. Pennsylvania, OKC 73159

James A. “Jim” Wallace came as a gift from God to his parents James A. “Doc” and Ruby Wallace on May 3, 1926. He returned to his Lord and Savior, Jesus Christ, on March 20, 2020. Jim graduated from Capitol Hill High School in 1944 where he played basketball for two years. The team only lost one game those two years and were undefeated and state champions his senior year. The one loss came in the state championship finals of his junior year. The morning after graduating, Jim was on a train bound for basic training in California. He served with the Navy in the South Pacific for 3 years. His ship was part of the second invasion that liberated the Philippines. This mass of ships was the largest assembled in history. Upon returning home Jim enrolled at OU. He married that spring and this union produced his two lovely daughters, Tressa and Nancy. He transferred to OCU where he played ball for Abe Lemons. He returned to OU and graduated. He later returned to OU and earned his Master’s, and received his PH.D. from American Christian University in Texas.
Jim began his coaching and teaching career in Terrill, OK. One and a half years later he moved his family to Oklahoma City where he worked in OCPS system for 40 years. He taught and coached at Jackson Jr. High and Lafayette Elementary. Jim served as Vice-principal at John Marshall, Grant High School and Capitol Hill High School. He served as principal at Stand Watie, West Nichols Hills, Prairie Queen and Telstar and took early retirement in 1986. Jim served one term as president of the Oklahoma City Educators Association. Jim was a charter member and the first president of the American Federation of School Administrators.
When a young man Jim began officiating girls softball, junior high, senior high and college football and basketball. He worked in the Big 8 in basketball. He served two terms as president of the Oklahoma Collegiate Officials Association. In 1992 he was inducted into the Oklahoma Officials Hall of Fame and in 2009 inducted into Capitol Hill High School Athletic and Activities Association Hall of Fame for his officiating expertise. He officiated an NAIA National Football Championship Game.
Jim was a 320 Mason. He was extremely active in his Gideon Camp. He loved placing GOD’s Word into someone’s hands.
He married Nancy Talbott in 1977. He and Nancy, themselves, built a home on Lake Texoma where the enjoyed fishing and golf for 22 years with friends and family.
Jim loved his jobs in the school business. The kids loved him as did his teachers. He always had an encouraging word for his fellow workers.
When the boiler explosion ocurried at Star Elementary in 1982, Jim was called upon to lead in the identification of the deceased. This had a profound and deep effect on his life.
He had a great sense of humor, a laugh that could he heard all over, a sense of fun and competitiveness, loved jokes, loved to tease. He could laugh at himself. Jim possessed a quick wit, always ready with a comeback. He was a man of his word, reliable, honest and thoughtful. He was an includer-if you married into the family, you were family. He was an optimist, a perfectionist in building and any work he did. He expected people to do the right, hated liars or those who misrepresenting things. Jim possessed common sense-a rarity in today’s world. Jim had a tender heart for kids and the aged due to their vulnerability.
Jim loved his LORD and the LORD’s church. He attended Southern Hills Baptist Church for over 25 years where her taught a Sunday school and served on various church committees. He was a faithful member of the Intercessary Prayer team since its inception.
Jim was predeceased in death by his parents and a 19-year old grandson, Wisdom Ledgerwood. He is survived by his loving and devoted wife of 42 years, Nancy, of the home, daughter Tressa and husband Glen Phipps, daughter Nancy and husband Bill Ledgerwood, brother Jerry and wife Mellodee Wallace, grandson Scott and wife Tisha Phipps, granddaughter Monica and husband Rick Bellinger, nephew Jim Wallace, eight great-grandchildren and three great-great grandchildren.
Read Less

To send flowers to the family or plant a tree in memory of James "Jim" Antone Wallace, please visit our Heartfelt Sympathies Store.

Receive notifications about information and event scheduling for James "Jim"

You will receive any future notification messages.
Print
1:00pm

Gene and Jo Downing sent flowers to the family of James "Jim" Antone Wallace.
Show you care by sending flowers

Posted Mar 22, 2020 at 02:37pm
Our deepest condolences to Nancy and family! We will certainly miss seeing Jim always praising the Lord on Sundays!!! May God hold you all closely!

Gene and Jo Downing purchased flowers and planted a memorial tree for the family of James "Jim" Wallace. Send Flowers

Posted Mar 22, 2020 at 06:28am
One of my memories about Jim was when he came to my school for our veterans day assembly. He came and was honored at the assembly with others. He then came to my classroom and read to my students.
Comment Share
Share via:

Dr. Wallace (as I knew him as) was my elementary school principle at Prairie Queen. During that time, he became one of my dad's life long golfing buddies. Dr. Wallace was an inspiration to all, and touched the lives of many, many people. Shawn Roberts 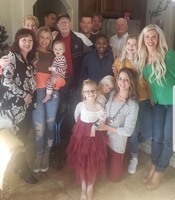 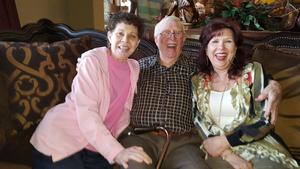