To share your memory on the wall of Judith Durbin, sign in using one of the following options:

Print
In lieu of flowers the family is asking donations be made to the Alzheimer's Association www.alz.org

Judith Ann Durbin, 79, of Midwest City, OK passed away on Saturday, March 21, 2020 in Midwest City, OK at her home surrounded by family ... Read More
In lieu of flowers the family is asking donations be made to the Alzheimer's Association www.alz.org

Judith Ann Durbin, 79, of Midwest City, OK passed away on Saturday, March 21, 2020 in Midwest City, OK at her home surrounded by family after a long battle with Alzheimer’s Disease.  Judith was born on April 26, 1940 at Fort Bragg, North Carolina to Harrison C. “Bill” and Edna Finley. She lived briefly at Fort Sill in Lawton, OK but spent most of her childhood in Collinsville, IL.  She attended Quincy College in Quincy, IL where she earned a bachelor’s degree in history and completed a semester abroad in Mexico during which she became fluent in Spanish. At Quincy, she met the man who would become her close companion and husband for more than 55 years, Charles E. Durbin, Jr.  They were married on October 12, 1963. Judith once remarked that what she wanted most in life was to travel and to be a mother. She was a military wife, accompanying Charles to his different duty stations in Arizona, Wisconsin, North Dakota, West Germany, and finally, Tinker AFB, and she saw him through two tours of duty during the Vietnam War.  Through these experiences, she was able to travel to Thailand, Austria, Italy, France, Belgium, Luxemburg, and even tiny Liechtenstein. Along the way, Judith gave birth to three sons and two daughters: Charles, Jim, Meg, Claire, and John. Judith was an avid reader and loved to write poetry and was a long-time member of the Central Oklahoma Writers Group.  She loved to discuss history, politics, science, philosophy, and theology. She had a deep interest in genealogy and traced both sides of the family back to their European roots. Judith was a gentle soul who spoke kind of others and welcomed all types of people into her life. She will be greatly missed by all those who loved and knew her. Judith was preceded in death by her parents and by her granddaughter, Maya Matsumoto.  She is survived by her husband, Charles, her children: Charles Durbin and wife, Sallie, of Oklahoma City, OK; son James and wife, Rebecca, of Oklahoma City, OK; daughter Margaret Goodwin and husband, Nick, of Midwest City, OK; daughter Claire Suttle and husband, Brian; and John Durbin of Yukon, OK; and grandchildren and step grandchildren: Elizabeth (Durbin) Dailey; Miley Durbin; Naomi Matsumoto; Annah Durbin; Ray Matsumoto; Isabella Perkins; Charles “Will” Durbin; Marshall Vanstavern; Jordyn Perkins; Harrison Durbin; Ruby Goodwin; and Mattox Suttle..  Judith is also survived by five nephews and four nieces on her husband’s side of the family. The family wishes to thank the caregivers of Home Instead Senior Care and Mercy Hospice for all their help.
Read Less

To send flowers to the family or plant a tree in memory of Judith Durbin, please visit our Heartfelt Sympathies Store.

Receive notifications about information and event scheduling for Judith Durbin

We encourage you to share your most beloved memories of Judith Durbin here, so that the family and other loved ones can always see it. You can upload cherished photographs, or share your favorite stories, and can even comment on those shared by others.

Posted Mar 25, 2020 at 06:53pm
Judy was one of the sweetest, kindest people ÷ I've known. I much admired her calm nature and joyful attitude. She will be greatly missed by her family and friends. Judy Goodwin
Comment Share
Share via: 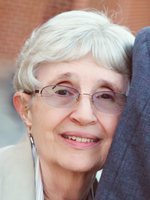