To share your memory on the wall of Velma Ashburn, sign in using one of the following options:

Provide comfort for the family of Velma Ashburn with a meaningful gesture of sympathy.

To send flowers to the family or plant a tree in memory of Velma Mardell Ashburn (Crow), please visit our Heartfelt Sympathies Store.

Receive notifications about information and event scheduling for Velma

We encourage you to share your most beloved memories of Velma here, so that the family and other loved ones can always see it. You can upload cherished photographs, or share your favorite stories, and can even comment on those shared by others.

Posted Apr 07, 2020 at 05:33pm
Dear Tom and Kathy and both of your families, We were saddened to read in the paper Sunday that your precious mother had died. A flood of memories flowed over us recalling the Edgewater neighborhood that we shared with all our kids going to Kirkland, Hefner, and Putnam City High. We cherished our friendship with Velma and Bill and the two of you . After you two went on to marry and create your own families, we were able to continue our life in the Greens with Velma and Bill. They were so proud of you and Kathy so we had some idea about how your families were growing and your accomplishments. Gee, Joe and I look at each other and think about how time has past and the wonderful memories we have created. Joe just celebrated his 87th birthday the past week. If I needed a recipe it was easy to turn to Velma as she was the best cook I ever knew and so gracious to share her culinary arts. We enjoyed any time we could spend time with Velma and Bill as we always learned something. Your dad was one on the nicest men that we have ever known... Back to the scouting days and those experiences.
Tom we remember when you got your Eagle Scout Designation. You had great parents and I know you are great parents, too. And surely grandparents and great grands by now. We saw Kathy a few years ago as we went on a trip, probably a Putnam City Travel Club trip, Kathy pick up Velma, we had a lovely visit with her. We always want to know about both of you and yours. Joe and I still live at 13201 St. Andrews Drive, OKC OK. H- 405-755-1790. Please know that we ask God to hold you close to His heart as you grieve Velma's death. We send our best love to all of you. Jean and Joe Burke 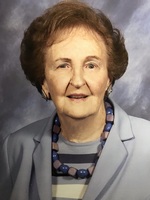