To share your memory on the wall of John Shannon, sign in using one of the following options:

Print
John Fred Shannon was born July 29, 1926 in Oklahoma City the son of A. Fred and Nola Hayes (Graham) Shannon. He completed this life at his home on Silver Lake on Thursday May 7, 2020 at the age of 93.

John was raised in Oklahoma City wh... Read More
John Fred Shannon was born July 29, 1926 in Oklahoma City the son of A. Fred and Nola Hayes (Graham) Shannon. He completed this life at his home on Silver Lake on Thursday May 7, 2020 at the age of 93.

John was raised in Oklahoma City where he graduated from Classen High School in 1944 and was an active member of their alumni association. He went on to earn a Bachelor’s Degree and served in the military. He married Jacqueline “Jackie” Perrin on September 26, 1953. They were longtime members of New Covenant Christian Church.

John was one of the true pioneers of television in Oklahoma. A still photographer when WKY-TV went on the air in 1949, he was called upon to assist this new broadcast phenomenon. John joined the station fulltime and was associated with Channel 4 for 37 years until his retirement in 1986.

Throughout his career, John has been honored by the Ad Club, the Oklahoma Film and Television Producers Club, the Boy Scout Council, and the United Way. In the mid 1950’s, he was recognized for his work by being named the Kodak National Cameraman of the Year.

At a time when producing television programming was not an easy task, John Shannon possessed an uncanny ability to work effectively under the tremendous deadline pressures. He was a caring person, readily willing to share his knowledge and experiences with young photographers and filmmakers. He was an innovative and indispensable behind-the-scenes talent who worked to bring quality entertainment and information to the viewing audience.

John Shannon was not only a pioneer, but also a contributor to the growth and success of Oklahoma television. John was honored by being inducted into the Oklahoma Association of Broadcasters Hall of Fame.

John was preceded in death by his parents; his granddaughter, Shannon Dawn Fish and his wife, Jackie of 65 years.

He is survived by his daughter, Joy Shannon Gould; his sister, Mrs. Peggy Franklin.

A memorial service is pending at this time.

To send flowers to the family or plant a tree in memory of John Fred Shannon, please visit our Heartfelt Sympathies Store.

Posted May 13, 2020 at 01:32pm
I remember spending exciting days and weekends fishing at John's and Peggy's home on Silver Lake. Johnny sure made my Aunt Nola and Uncle Fred proud. 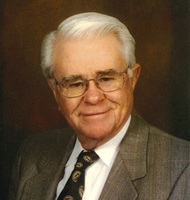