To share your memory on the wall of Ralph Tinkham, sign in using one of the following options:

Print
Ralph Edward Tinkham was born at home on May 24, 1932 in Oklahoma City, Oklahoma to the late Harry V. and Rachel E Tinkham. Ralph left this earth on May 21, 2020 just shy of his 88th birthday.

Ralph grew up in Oklahoma City and spent ti... Read More
Ralph Edward Tinkham was born at home on May 24, 1932 in Oklahoma City, Oklahoma to the late Harry V. and Rachel E Tinkham. Ralph left this earth on May 21, 2020 just shy of his 88th birthday.

Ralph grew up in Oklahoma City and spent time with his 4 siblings and often “running away from home” to go spend time with his grandparents.

He later joined the Army and served in Korea and as a civilian in Vietnam. Ralph went on to meet the love of his life, the late Bonnie Coshow, who he would go on to marry on December 14, 1957, only one month after they had met.

Ralph and Bonnie settled down in Oklahoma City and started a family, a son, Eddie, and two daughters Kelly and Lisa. Ralph worked hard to provide a lovely life for his family. He and Bonnie enjoyed crafting, with Ralph building the pieces and Bonnie painting the pieces and selling them at craft shows all over the state of Oklahoma.

Soon came grandchildren and it seemed like that was what Ralph was destined to be his entire life- Papa. He enjoyed playing with his grandchildren, watching them play softball or baseball and always had a tall tale to tell which would finish in his classic catch phrase- “Would I lie?” the answer is yes. Those grandchildren had children and with that Ralph’s love only multiplied.

Ralph spent much of his time later in life caring for those he loved. He was a natural caretaker and did so with smile on his face. After his wife’s passing Ralph moved closer to family in Choctaw, Oklahoma with his trusty companion, his dog Cowboy. Ralph and Cowboy took care of each other and also annoyed each other, truly a match made in heaven.

To send flowers to the family or plant a tree in memory of Ralph Edward Tinkham, please visit our Heartfelt Sympathies Store.

Receive notifications about information and event scheduling for Ralph

We encourage you to share your most beloved memories of Ralph here, so that the family and other loved ones can always see it. You can upload cherished photographs, or share your favorite stories, and can even comment on those shared by others.

Papa Harley and Gramma JC sent flowers to the family of Ralph Edward Tinkham.
Show you care by sending flowers 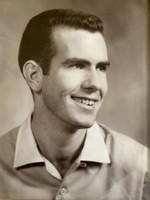