To share your memory on the wall of Melba Culbreth, sign in using one of the following options:

Provide comfort for the family of Melba Culbreth with a meaningful gesture of sympathy.

A graveside service will be held 11:00 AM Tuesday, May 26, 2020 at the Hillcrest Memorial Park Cemetery in Ardmore, Oklahoma.
Read Less

To send flowers to the family or plant a tree in memory of Melba Maurine Culbreth (Cavins), please visit our Heartfelt Sympathies Store.

Receive notifications about information and event scheduling for Melba

We encourage you to share your most beloved memories of Melba here, so that the family and other loved ones can always see it. You can upload cherished photographs, or share your favorite stories, and can even comment on those shared by others.

Gary D. Cavins and Howard Cavins have sent flowers to the family of Melba Maurine Culbreth (Cavins).
Show you care by sending flowers

Posted May 26, 2020 at 08:24am
Clydean, I’m so sorry to hear about your mom. You and your family are in my thoughts and prayers.
Love,
Debbie Keeton High
Comment Share
Share via:
BF

Posted May 26, 2020 at 12:03am
Clydean, I am so sorry to here about your mom. I have such fond memories of her from high school days. She always welcomed me into your home, as if I was just another daughter. Her laughter was so cute. She let me call her Mimi, which I thought was funny. I just loved being around your Mom and Dad. I always felt like they were my Mom and Dad also. They were so special to me. You have been blessed. You come from a only child, to a large family. Enjoy your family while you have them I think of you often. All my love, {Nanner] Belinda Fields
Comment Share
Share via:
GC

Posted May 24, 2020 at 10:53am
My Mimi....I have a lifetime of precious memories, especially childhood memories. Brandon, Cortney, and I spent lots of time at Mimi and Papa's house in Ardmore. They kept us constantly entertained with bike riding, trips to the park and the lake, cooking, playing, and pretty much anything we wanted to do. If we wanted to do an Easter egg hunt in October. She would help us boil eggs, die them and we'd hunt them in the backyard. Seriously, anything we wanted to do at their house, we did it. They loved us fiercely and thought we hung the moon.

Too many stories and memories to share but forever thankful God blessed me with a grandma that loved the Lord. She has always been a Proverbs 31 woman in my eyes. She raised my mom in the Church, we were raised in the Church, and we are raising our children in the Church. She leaves a legacy, and will forever be missed.
I love you Mimi!!

"She is clothed in strength and dignity, and she laughs without fear of the future. When she speaks, her words are wise, and she gives instructions with kindness. She carefully watches everything in her household and suffers nothing from laziness. Her children stand and bless her, her husband praises her: There are many virtuous and capable women in the world, but you surpass them all! Charm is deceptive, and beauty does not last; but a woman who fears the Lord will be greatly praised. Reward her for all she has done. Let her deeds publicly declare her praise." Proverbs 31:25-31
Comment Share
Share via: 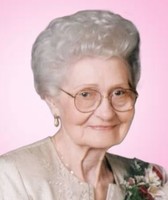