To share your memory on the wall of Juanita Adams, sign in using one of the following options:

Print
Visitation will be held from 4 p.m. until 7 p.m. on Monday, June 29, 2020 in the chapel of Harris Funeral Home in Madisonville, KY


Services to celebrate her life will be held at Shartel Church of God 11600 S. Western Ave Oklahoma ... Read More
Visitation will be held from 4 p.m. until 7 p.m. on Monday, June 29, 2020 in the chapel of Harris Funeral Home in Madisonville, KY

Viewing will beginning at 11:00 AM at the church prior to services

Condolences may be made to the family at www.harrisfuneralinc.com or www.vondelsmithmortuary.com

Juanita Geraldean Adams was born on October 13,1932 in Bakersfield, California. She started playing the piano when she was 10 years old. When she was 19 years old she was asked to play the organ for the international Youth Convention in Portland, Oregon.
She attended Warner Pacific College and received a Bachelor of Music Degree in 1955. While at college she met Robert Adams and they married on August 30, 1952. They would have been married for 68 years this coming August. After graduation from Warner Pacific Bible College Bob and Juanita were asked to come to Alberta Bible Institute in Alberta ,Canada. Along with Bob they taught voice, piano, and directed the choir. In 1957, Juanita and Bob accepted the position as Head of the Music Dept. at Gulf Coast Bible College in Houston Texas. In 1960 she was also asked to play the organ for the International Youth Convention in Houston, Texas. Later in 1981 she went back to school to get her Master of Music degree at the University of Houston in Houston, Texas. During the summers she played for 18 Church of God State camp-meetings alongside her husband Bob. She was asked to play for 6 evening services at the Church of God International Convention in Anderson, Indiana.
In 1985 Juanita and Bob moved to Oklahoma City, OK with GBC, later to be called Mid America Bible College, and now Mid-America Christian University. Before she retired, MACU gave Juanita a Honorary Doctorate for 37 years of service to the college.
In 1993 when they retired, they were asked to fill missionary assignments for the Church of God in Tokyo, Japan, in Cairo, Egypt, and in Beirut, Lebanon. While at Tokyo, Japan Juanita was asked to play a concert on a new pipe organ that was given to a Church of God Girl’s School. She was also asked to play at the Church of God Convention in Sydney, Australia.
In 2000 she was diagnosed with breast cancer and began her journey as a cancer warrior. After many treatments of chemotherapy and radiation she suffered common side effects, such as losing her hair, but with the end result of being a cancer survivor.
When she started developing Dementia she had to stop playing for special events. Before moving to Kentucky, she gave her grand piano to Mid America Christian University.
In 2016 Juanita and Bob moved to Madisonville, Kentucky where her daughter and son-in-law lived. She was lovingly cared for at home by Bob, Jayne & Robert for 4 years as her health continued to slowly decline. She would eventually develop pneumonia which lead family to place her on hospice. She left this land of the dying and entered into the land of the living at home on June 25, 2020 surrounded by the love and presence of her family.
She was preceded in death by her parents Richard and Mildred Kyker, her brother LaVern Kyker and his wife Boots, her brother Ron Kyker and his wife Betty, and her grandson Nathaniel James Gangwer-Adams.
Survivors include her husband, Robert A. Adams, her daughter Jayne Adams White and her husband Robert White, her son Randall “Randy” Adams and his wife Christina Gangwer, their 5 grandchildren Brittney White Wells and her husband Mack Wells, Ryan White and his wife Kate Imperial White, Jason White, Elliott Gangwer-Adams, and Samuel Gangwer-Adams, and her four great-grandchildren Rhett, Lula, Emery, and Harrison.
Read Less

To send flowers to the family or plant a tree in memory of Juanita Geraldine Adams, please visit our Heartfelt Sympathies Store.

Receive notifications about information and event scheduling for Juanita

We encourage you to share your most beloved memories of Juanita here, so that the family and other loved ones can always see it. You can upload cherished photographs, or share your favorite stories, and can even comment on those shared by others. 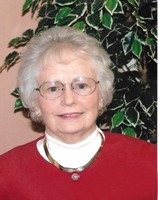