To share your memory on the wall of Patty Ann Thompson, sign in using one of the following options:

She was preceded in death by an infant brother, Boyd Luther Wynn, and her mother Laura Anna "Dolly", who died of cancer in 1979.

To send flowers to the family or plant a tree in memory of Patty Ann Thompson, please visit our Heartfelt Sympathies Store.

We encourage you to share your most beloved memories of Patty Ann Thompson here, so that the family and other loved ones can always see it. You can upload cherished photographs, or share your favorite stories, and can even comment on those shared by others.

Bill Marcum, Monty & Carol Marcum ,Kelly & Jennife, Your friends at Crossings Christian School, and other have sent flowers to the family of Patty Ann Thompson.
Show you care by sending flowers

Posted Aug 25, 2020 at 09:39am
What a great lady, she will be sorely missed. Thoughts and prayers with Richard, Rick, Micki and the the rest of this wonderful family.

5 trees were planted in the memory of Patty Ann Thompson

Posted Aug 28, 2020 at 05:16pm
Richard, Micki, and Rick, We are so sorry for your loss. Patty was a super sweet lady, and we thought a lot of her. We all have so many wonderful memories of time spent with Patty and you all. Prayers for comfort to you all. With love, Kerri “McIntyre” Stockstill, James and Shirley McIntyre, Bret McIntyre
Comment Share
Share via:
KK

So very sorry to hear of the loss of Patti. She was a wonderful person so kind to everyone she ever met. We’ll miss our days of seeing her and talking with her. She’ll be greatly missed. Sending prayers to everyone in the family . 🙏❤️ Diana Simms , Kellie Ketcher, Jennifer Kniss
Comment Share
Share via:
SB

Posted Aug 26, 2020 at 09:56pm
I am so sorry for the loss to the family, she will truly be missed. It was good to see her while she was visiting my mom in the hospital several years ago. I have such fond memories as a child from when our families got together and the Thompson family taking me to Six Flags (had to make the mandatory stop at the Hilltop Cafe!).
Comment Share
Share via:
HS

Posted Aug 26, 2020 at 12:54pm
With deepest sympathy-keeping you all in our thoughts and prayers. Kevin and Liz Bahner and Felix, Sara, Caroline and Cruz Cortez

Flowers were purchased and a memorial tree planted for the family of Patty Ann Thompson. Send Flowers 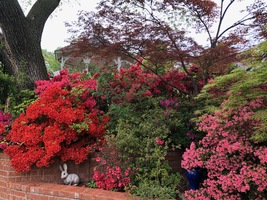