To share your memory on the wall of Raymond Foote, sign in using one of the following options:

Raymond “Pops” Foote, 72, of Oklahoma City, OK passed away on August 31, 2020. Raymond was born December 14, 1947 to Herman and Nellie Foote in Oklahoma City, Oklahoma. Raymond grew up in Oklahoma City and graduated from Capitol Hill High School. He went on to serve in the U.S. Army during Vietnam from 1967-1969 in the 4th Infantry. He was awarded the Army Commendation Medal for his sustained acts of heroism. During his life he worked and retired from Tinker Air Force Base as a jet engine mechanic. Raymond was a fan of old classic cars and hot rods. He was a loving brother, father, grandfather and uncle who will be remembered for his generous nature. Pops will be greatly missed.

He was preceded in death by his:
Parents.
Read Less

To send flowers to the family or plant a tree in memory of Raymond Foote, please visit our Heartfelt Sympathies Store.

Receive notifications about information and event scheduling for Raymond Foote

We encourage you to share your most beloved memories of Raymond Foote here, so that the family and other loved ones can always see it. You can upload cherished photographs, or share your favorite stories, and can even comment on those shared by others. 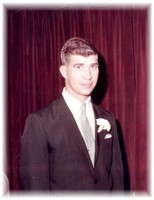