To share your memory on the wall of Johanna Emanuel, sign in using one of the following options:

Print
Johanna Walburga (Stadler) Emanuel was born March 2, 1937 in Ingolstadt, Germany the daughter of Eduard and Walburga (Sillinger) Stadler. She went to her Heavenly reunion on Wednesday, September 16, 2020 at the age of 83.

Johanna was rai... Read More
Johanna Walburga (Stadler) Emanuel was born March 2, 1937 in Ingolstadt, Germany the daughter of Eduard and Walburga (Sillinger) Stadler. She went to her Heavenly reunion on Wednesday, September 16, 2020 at the age of 83.

Johanna was raised in Germany. She met Eldon Cecil Emanuel while he was serving in the military overseas and they were married in Germany on July 11, 1956. They were stationed in Lawton Ok in 1967 and lived there many years until they moved to Oklahoma City to be near their daughter. Eldon preceded her in death on August 1, 2018 after being married 62 years.

Memorials may be made to the Wounded Warrior Project, PO Box 758517, Topeka, Kansas 66675-8517. www.woundedwarriorproject.org
Read Less

To send flowers to the family or plant a tree in memory of Johanna Walburga Emanuel (Stadler), please visit our Heartfelt Sympathies Store.

Receive notifications about information and event scheduling for Johanna

We encourage you to share your most beloved memories of Johanna here, so that the family and other loved ones can always see it. You can upload cherished photographs, or share your favorite stories, and can even comment on those shared by others.

Bob, Mona, Denice and Tammy McPeters and Team at the Weather Service in Cheyenne sent flowers to the family of Johanna Walburga Emanuel (Stadler).
Show you care by sending flowers

Team at the Weather Service in Cheyenne

Posted Sep 18, 2020 at 11:04am
Rich, We want you to know that we are all thinking of you at this time. Our deepest sympathy to you and your family.

Team at the Weather Service in Cheyenne purchased flowers for the family of Johanna Emanuel. Send Flowers

Sweet Tranquility Basket was purchased for the family of Johanna Emanuel. Send Flowers 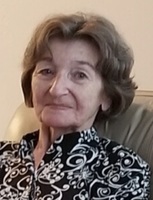