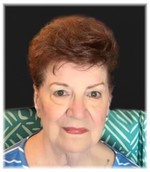 In lieu of flowers, family suggests memorials to a local animal shelter of donor’s choice. Funeral Services are scheduled for 1:00 PM Monday, October 12, 2020 at the South Colonial Chapel.

Darla Jeanne Moore entered Heaven’s gates on Sunday, October 4, 2020 at the age of 82. The daughter of Eugene Everett and Una Mae Taylor, Darla was born on June 20, 1938 in Oklahoma City, Oklahoma. After graduating from Central High School, Darla began working in the records management and as a dispatcher for the OKC Police Department. While working for the police department, Darla met the love of her life, Lawrence Gerald Moore, fondly known as L.G. where he also worked as an OKC Police Officer for more than 30 years. The two were united in marriage in 1959. Shortly after they married, Darla began working as a librarian for the OKC Municipal Library and later retired after 35 years of dedicated service. Darla was born with the gift of gab. She loved to talk and never met a stranger. An OU football fanatic to the core and gardener at heart, Darla was an avid lover of all God’s four-legged creatures, especially German Shepherd dogs. While growing up, Darla always loved and served others with the compassion and love of the Lord. Darla was a loving wife, devoted mother, doting grandmother and faithful friend who will be deeply missed each day.