To share your memory on the wall of Billy Eugene \"RED\" Hart, sign in using one of the following options:

Red will be fondly remembered as having a strong work ethic, loved sports, and always took good care of those in his life. With several records for basketball and baseball at Varnum high school, he went on to play pro baseball for the Chicago White Sox organization until he was drafted into the U.S. Army. After his military service, he spent many years in the oil fields of Oklahoma to provide for his family. Always taking great pride in his home’s appearance, he would spend countless hours tending to his garden and perfecting his lawn’s landscaping, never missing stringing lights at Christmas or providing homegrown vegetables to anyone who needed them. As passionate as Red was about his home and garden, he also had a passion for sports. He always enjoyed playing basketball, watching his OU Sooners and OKC Thunder, and summer vacations at the horse races in Ruidoso. After retirement, he started a second career as a city bus driver. Not that he needed the money, but just because he enjoyed being around people and helping them so much.

To send flowers to the family or plant a tree in memory of Billy Eugene "RED" Hart, please visit our Heartfelt Sympathies Store.

We encourage you to share your most beloved memories of Billy Eugene "RED" Hart here, so that the family and other loved ones can always see it. You can upload cherished photographs, or share your favorite stories, and can even comment on those shared by others. 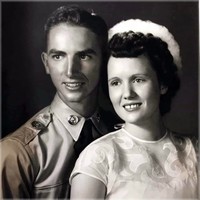