To share your memory on the wall of Mervyn Smiley, sign in using one of the following options:

Print
Funeral services for Mr. Smiley are pending at this time. Please check back later for service information.

Mervyn Smiley, beloved husband, father, grandfather, great grandfather and friend, entered Heaven’s gates, his eternal home, on Tuesday, December 15, 2020 at the age of 88. The son of Oscar Raymond and Mamie Alma Smiley, was born on December 20, 1931, in Madill, Oklahoma.

Mervyn grew up in Madill, graduating from Madill High School in 1950. After his service in the Coast Guard (1953-1957), Mervyn graduated in 1961 from the University of Oklahoma with a Bachelor's Degree in Business Administration.

Mervyn married his one true love and wife of 67 years, Florence Earline Clark, on October 9, 1953 in Dallas, TX. Mervyn and Earline’s union was blessed with three daughters; Tanya, Tera, and Starla.

Mervyn served in the Coast Guard during the Korean War, stationed in Guam, as a meteorologist/ radioman. He later worked as an Insurance Adjuster for the State of Oklahoma, retiring in 1995.

Mervyn was an avid fisherman; in the warmer months, you could find him floating in an inner tube, in the marshiest part of a pond or lake, with a pole in the water. He always had his purple worms (the favored bass fishing lure), in his tackle box. He finally caught his lunker, as he called it, and had it proudly mounted.

He was also an avid OU football fan. When OU played, you could be sure he was watching. Him and his grandson Zack had a ritual of running down the porch steps, around the trees and making a loop in the front yard whenever OU scored. You could hear them hollerin’ blocks away.

He loved his grandchildren. Each one of them was special to him in their own way, and each thought they were his favorite.

He was a devout Christian, longtime member and dedicated Deacon at Knob Hill Baptist Church. He brought his family up in a loving home, filled with laughter and a love for Christ. He made people laugh and never met a stranger. He had a peace within himself that spread outward for all to see.

Mervyn’s greatest love was serving God and raising his family in a christian home. By doing so, he gave us the gift of knowing our Lord and Savior, Jesus Christ. With that knowledge, we have no doubt that we will all be together for eternity. He not only did this for his immediate family, but he led countless other souls to Jesus. He was a true believer and led his life as a follower of the Lord, as a true believer and christian should. He was not free of sin, as is no one, and no mortal deserves to go to heaven, but in our eyes, our dad, above anyone we have ever met, deserves his place in God's Kingdom.

To send flowers to the family or plant a tree in memory of Mervyn Dale Smiley, please visit our Heartfelt Sympathies Store.

Receive notifications about information and event scheduling for Mervyn

We encourage you to share your most beloved memories of Mervyn here, so that the family and other loved ones can always see it. You can upload cherished photographs, or share your favorite stories, and can even comment on those shared by others. 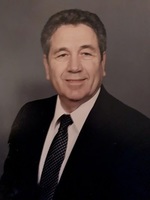