To share your memory on the wall of Jerry Wallace, sign in using one of the following options:

Jerry, son of James A. and Ruby Wallace, was born at home in south Oklahoma City on May 11,1934. His father was a minister so Jerry grew up on the front pew of the church. He was saved at an early age and served the Lord his entire life. He trusted the Lord with all his heart and in all ways acknowledged Him. As a result, Jerry lived a rich and full life. Most recently Jerry was a member of Capitol Hill Assembly of God Church.

Jerry lived most of his life in south Oklahoma City and was a strong athletic man. His athletic focus was primarily basketball. His coach during his sophomore year was his brother Jim in Terrell, Ok. The family moved back to Oklahoma City where Jerry graduated from Capitol Hill High School in 1958, where he was an All-State Basketball player. Jerry attended OSU on a scholarship and played under Coach Henry Iba. He transferred to and graduated from OCU and played basketball under Coach Abe Lemons. Jerry later received his master’s degree from Central State College. Many of Jerry’s friends and cherished relationships came from his Capitol Hill, OSU and OCU teammates.
Jerry had a special and unique relationship with his only brother, Jim. They worked in the same profession, officiated sports together, shared their life and their love of Christ with one another and lived next door to each other for over 56 years. Together, they were a treasure to family and friends.
Jerry’s 39-year professional career was with the Oklahoma City Public School system, where he was a teacher at Coolidge, assistant-principal at Adams, served as principal at Davis, Page Woodson, Classen 5th year Center, Horace Mann, Southern Hills and Hillcrest Elementary School where he retired in 1994.
Jerry was a real outdoors man. He enjoyed fishing, bird hunting, and trail riding. An animal lover, Jerry always had a least one pet but usually many more. As a part-time hobby Jerry officiated girls’ softball, junior high and high school football and basketball for several years.
Jerry was a kind and giving man. He held his co-workers in high esteem, and they loved to work for him. He was a favorite among his students who he treated with respect but demanded discipline. Jerry was a fun guy who always had a joke or story to share. People really enjoyed being in his company. He helped many people during his lifetime. He put others needs in front of his own, sacrificing time and treasure to the benefit of others. Being the kind of man he was, Jerry even took a year’s leave-of-absence from his job to take care of his ill mother-in-law.
Jerry took an active role in helping and guiding his son Jim in his FFA efforts and in developing Jim’s basketball and life skills.
Jerry was predeceased by his parents, James A. and Ruby Wallace and brother Jim Wallace.
He is survived by his wife of 58 years Mellodee, of the home, son Jim (Melodie) of San Antonio, Texas, granddaughter Lyssa (Justin) Odette of San Diego, CA, great-granddaughters Rubi Lee and Rosie Kay Odette, and granddaughter Leah Wallace of San Antonio, Texas.
Read Less

To send flowers to the family or plant a tree in memory of Jerry Wallace, please visit our Heartfelt Sympathies Store.

Receive notifications about information and event scheduling for Jerry Wallace

We encourage you to share your most beloved memories of Jerry Wallace here, so that the family and other loved ones can always see it. You can upload cherished photographs, or share your favorite stories, and can even comment on those shared by others.

Karl and Pat Kapp sent flowers to the family of Jerry Wallace.
Show you care by sending flowers

Karl and Pat Kapp purchased the Large Basket Garden and planted a memorial tree for the family of Jerry Wallace. Send Flowers 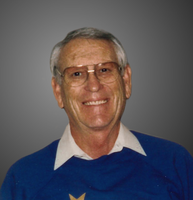