To share your memory on the wall of Melba Lovelace, sign in using one of the following options:

Print
Melba Jo (Booth) Lovelace was born February 13, 1930 in Red Oak, Oklahoma the daughter of Marion Monroe and Cordie Lee (Johnston) Booth. She completed this life on January 28, 2021 in Oklahoma City at the age of 90.

She graduated from P... Read More
Melba Jo (Booth) Lovelace was born February 13, 1930 in Red Oak, Oklahoma the daughter of Marion Monroe and Cordie Lee (Johnston) Booth. She completed this life on January 28, 2021 in Oklahoma City at the age of 90.

She graduated from Panola High School in 1948. Before she came to Oklahoma City, Melba worked as a reporter at the Latimer County News Democrat in Wilburton. She took that job after the publication’s editor, Harold Moore, spoke to a class she attended at Eastern Oklahoma A&M.
She came to OPUBCO as a secretary and headed the dictation and typing pool. Her team was responsible for typing up stories called in from reporters and columnists in remote locations. That required fast-twitch editing skills, which managing editor Jim Standard recognized and made her a copyeditor, too. She approached the managing editor and said, ‘I can write a better column than this.' He said ‘Put something together,' so I did.” She chose to write about her passion for cooking and offered tips for homemakers and hobbyists. It was a hit. Mail was so intense she began sharing questions from readers in search of answers from other readers. Melba’s Swap Shop was born. The column first started appearing in December of 1975 in the Saturday edition of The Oklahoma City Times and in the Comics section of The Sunday Oklahoman. By spring of 1977, the column had grown so popular it went daily.
After writing the column seven days a week for 17 years—about 4,000 of them—she retired in 1992. She continued to write the column weekly which appeared in the Life section and featured on NewsOK.com with her last column appearing this last week.

She did television shows, a regular radio show and taught cooking classes at UCO, and wrote 16 books of recipes, crafts, quilting, and household hints. She also wrote book reviews for the newspaper. Her mailbox is consistently filled with letters from readers. She says, “My readers are my friends.” She was inducted into the Oklahoma Journalism Hall of Fame in 2010.

Melba was a judge at the State Fair of Oklahoma. She judged cakes, pies, ice cream and many other ribbon-seeking desserts for decades, not only at the state fair but also at the Oklahoma County Fair and many others.
She was a member of the New Hope United Methodist Church.


Graveside service for Melba Lovelace will be held at 1:00 p.m. on Tuesday, February 2, at Resurrection Cemetery, NW Expressway & Council.

A celebration of her life will be held at a later date when safety permits.
Read Less

To send flowers to the family or plant a tree in memory of Melba Jo Lovelace (Booth), please visit our Heartfelt Sympathies Store.

Receive notifications about information and event scheduling for Melba

We encourage you to share your most beloved memories of Melba here, so that the family and other loved ones can always see it. You can upload cherished photographs, or share your favorite stories, and can even comment on those shared by others.

Posted Feb 01, 2021 at 04:57pm
I first met Melba around 2000 when she came to me to get her hair done. Once a week, for 20 years, we grew a friendship as we shared stories - hers were so much better than mine. She was a true trailblazer for women in journalism and often spoke of the sweet letters her readers would send. She was gracefully modest and would laugh at my description. I know exactly what she would say. She’d say, “I don’t know about that.” But it’s true, nonetheless. She loved to talk about food and if she really liked you, she’d ask after your conversation with her, “Do you mind if I publish that recipe in my column?” She was the kindest soul, never wanted anyone to go out of their way for her, and always asked if there was anything she could do for you, regardless of what troubles she was experiencing. We shared a love of words, books, introversion, and the indoors and used to joke that we must somehow be related. I’m so grateful for her friendship and her loyalty as a client. There will forever be a hole in my heart every Saturday at 10 am with the loss of her in my life. ❤️
Comment Share
Share via:
KR

Posted Feb 01, 2021 at 11:13am
We are so sorry for your loss. We loved having Melba as a neighbor. She will be missed. You have our deepest sympathies and heartfelt blessings.

Posted Jan 31, 2021 at 07:38pm
Dear Sweet Melba..... God is Good Such wonderful sweet times we had at the Fairs you were my favorite person to see and visit with and your tag along You sweet Daughter Sandy ...
It was so fun watching you and Sandy taste so many different flavors of especially iceCream at the Oklahoma County Fair and our Great Oklahoma State Fair you never new till the end who was the Champion and you were really the Champion being brave enough to do this...
God Bless You Sweet Melba I’ll never forget all you did and the bravery you and Sandy showed to all your Oklahoma Fans... test tasting sometimes 50 or more iceCreams, Cookies, Candy, Pies , Pastries of all kinds and Casserole dishes and never once showed like or dislike...
God Bless You Sandy....You were the Best Daughter a Mother could ever have ... God Bless All your Family...
RIP Ms. Melba 🙏🙏🙏🙏🙏Elsie Harner💕
Comment Share
Share via:
SS

Posted Jan 29, 2021 at 08:52am
I enjoyed working with Melba at The Oklahoman. She was a true professional who treated everyone (from secretaries to editors) as if they were special! I'll miss reading her weekly column! Condolences to her family. - Phyllis Bennett
Comment Share
Share via: 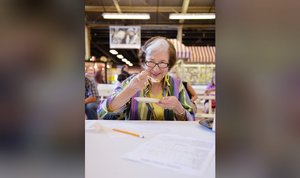 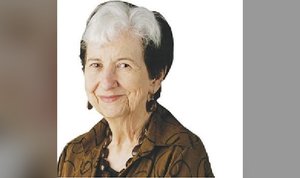