To share your memory on the wall of Berry Mashburn, sign in using one of the following options:

Print
Donations can be made to Make A Wish Foundation.

Berry was born in Seminole, OK to Berry William and Dorothy Patterson Mashburn on Nov 13, 1934. His father was killed in an oil field explosion when he was 13. Berry was one of two childr... Read More
Donations can be made to Make A Wish Foundation.

Berry was born in Seminole, OK to Berry William and Dorothy Patterson Mashburn on Nov 13, 1934. His father was killed in an oil field explosion when he was 13. Berry was one of two children. As a young boy he enjoyed all kinds of athletics. As a teenager, Berry started playing football and participating in track and field. He played for the Capitol Hill Redskins in high school and excelled in pole vaulting and football. He graduated in 1952 from Capitol Hill High School.

Berry’s athletic career began at Capitol Hill Junior High in 1948 when he played forward for the basketball team. While Berry eventually gave up hoops, he lettered in football and track at Capitol Hill High School. As a senior in 1952, he won the mid state championship in pole vaulting. For the football team, he played defensive back and offensive end. They won the mid state conference his senior year.

In 1952, OU offered him a combination scholarship for football and track. In 1954 he joined the Army and proudly served his country for two years. While in the Army, he thrived in sports, winning the far east championship in both pole vaulting and football. In 1955 he led his team to an undefeated season and was later chosen for the Air Force All Star Team. As quarterback, he led his team to a victory in the Rice Bowl.

After an honorable discharge, Berry went on to continue his education and play football at Central State University, receiving his Bachelors degree in Physical Education and Business.

While at Central State University, he met the love of his life, Linda Anderson. The two were inseparable and were married on June 23, 1963 in Oklahoma City.

After he married, he moved back to South Oklahoma City and became the owner of Mashburn Real Estate Company. He went into the home building business with his brother, J.W., in 1971. He retired from home building at the age of 62.

He enjoyed fishing trips, golf, yard work, staying physically fit and was an avid Dallas Cowboys fan. Berry’s most cherished time was spent with his family and friends. He and Linda enjoyed traveling the world and spending the winter months at their favorite spot in Cancun, Mexico for the past 14 years.

Berry was preceded in death by his Parents and Granddaughter, Sarah Mashburn.

To send flowers to the family or plant a tree in memory of Berry Mashburn, please visit our Heartfelt Sympathies Store.

Receive notifications about information and event scheduling for Berry Mashburn

Donations are being accepted for: MAKE A WISH FOUNDATION OF OKLAHOMA INC.

We encourage you to share your most beloved memories of Berry Mashburn here, so that the family and other loved ones can always see it. You can upload cherished photographs, or share your favorite stories, and can even comment on those shared by others.

Allen Anderson, Scott & Shirley Jones - Steve and Becky Brazeal, and other have sent flowers to the family of Berry Mashburn.
Show you care by sending flowers

We are heart broken at the loss of Berry. His loss feels like a loss in our own family. Because to us Berry and you Linda are family.

I remember some years back when my dad called me telling me about a very serious toe nail fungus he, Berry and some other friends were suffering from. I asked him, "what have you guys been up to"? Dad said they heard of getting cornmeal from feed stores and soaking in it and would I bring them some. All the way from Texas. And they needed a big bag. I did and all the time imagining these guys all sitting around having a foot soaking party while telling their tales.

Berry's smile, laughter and kindness will be greatly missed by many. My family will forever been grateful to have had him in our lives even for a short time.

Posted Feb 23, 2021 at 11:12am
My condolences to the family, Barry was a great man and raised a wonderful and loving family.
Rudessa Phipps 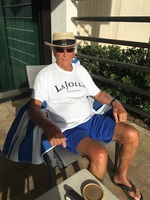