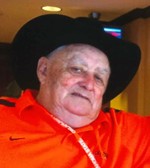 Visitation will be from 4-8 PM Thursday July 5, 2018 at Vondel Smith Mortuary at South Lakes with the family present to greet friends from 6-8 PM


In lieu of flowers, memorials may be made out to: Crooked Oak High School, note: The Vice Family & Friends Scholarship Fund, & mailed to 1608 Berwick Dr., McKinney, TX 75070.


Leo James Thurman, age 81, resident of Shattuck, Oklahoma crossed life’s goal line to be with the Lord on June 29th, 2018. Born on November 19th, 1936 in Gracemont, Oklahoma to Lee and Delia Louise (Robrecht) Thurman. He graduated in 1955 from Anadarko where he earned three letters playing football. In 1956 he went to Bacone College to play football & after one year transferred to Central State College. In 1959 he came to Crooked Oak High School as an assistant football coach. In 1961 he became head track coach & in 1962 he was named head football coach. He was Little All-City Coach of the year in 1964 & coached the All State team as South’s defensive coordinator in 1968. He was head football coach ending the 1971 season & then worked for the State Department of Education until retirement. If asked what he did for a living, he would simply say, “I was a football coach.” He coached for his players and to help them prepare for life. After one particularly good season, a reporter asked him if he had a good year. He replied, “I don’t know yet. Ask me in 20 years & then I’ll know how my players turned out.” He passed away, proud of his players. He leaves cherished memories with his loving family: his son, Randy & wife, Pati Thurman of Oklahoma City, his #1 grandson, Levi Thurman and his son, Rodney Thurman of Norman, Oklahoma. His brother, Jerry & his wife Kathy Thurman of Arkansas City, Kansas & his sister Nellie Jean Thurman Edwards of Anadarko; former wife Loynita Spillmeier; as well as beloved extended family & friends who will miss his presence on earth deeply. He is preceded in death by his father, Lee Thurman & his mom, Delia Thurman & by his sister, Jessie Jeffrey.

To send flowers to the family or plant a tree in memory of Leo James Thurman, please visit our Heartfelt Sympathies Store.